Stable & Firm: Corner sofa of patio sectional set with four reclining levels to lie down. Feel free to enjoy leisure time at your desired angle. Clips connect the sections and fastening strips prevent cushions from sliding.
Practibility & Durability: PE rattan has high tensile strength, water resistance to fit all-weather condition. Patio furniture sectional sets constructed with steel frame that is resistant to rust and corrosion.
Sectional & L Shaped Outdoor Sofa: 7 piece patio sectional couch can be freely assembled into a set. You can choose combination based on your need.
Comfort & Machine Washable: Cushions of wicker conversation set can relax you. They have removable, machine-washable covers that are easy to clean.
Applicability & Package: Outdoor sectional sofa widely used for patio, porch, backyard, balcony, poolside. It is delivered with three boxes. You may not get all boxes at the same time. We recommend assembling the set after receiving all boxes.

This set will be delivered with 3 packages.

Whoever made these instructions, they were smoking crack.

J
Judy
It looks great. I love it.

It's a wonderful couch and the table has a very sturdy tempered glass top. The one issue I have is I can't get the clips on the bottom on to connect the pieces so the pieces move.

I purchased this set at the beginning of the pandemic for our deck. We've used it A LOT in the past year and the frame has held up perfectly (we're larger folks). It looks good and can be easily setup in a different configurations. We've seen a some wear on a cushion cover and had a broken zipper on another. (we have a preschooler so we've washed the covers several times) I reached out to the seller on two separate occassions and both times they replaced the cushions!ProsSturdy frameWashable coversEasily reconfiguredEasy assemblyExcellent customer serviceConscushions are a bit on the soft side... for "normal" sized folks they're fineWash covers carefullyAdvice: If you need to wash the covers, use cold water, the gentle cycle and make sure the zipper is closed. The stitching inside the covers is a little rough and might start to pull otherwise.

I am very happy with my new furniture. I read multiple reviews and compared different products before I made this purchase. This set was affordable, nice size, comfortable and attractive. This set has a high enough back to sit comfortably. (A complaint about other products) The one corner piece lifts to a reccliner which is an added bonus. Great with a throw pillow. Most of the back pillows have straps except corner pieces but when it is all together, they sort of hold in place together. I was also very happy with the delivery. It was listed as 7-10 days, and it came in 2! It was not difficult to assemble either. I would recommend this 7 piece sectional. (Purchased beige/black)

Decent outdoor sofa set for the price. The seats are a bit uncomfortable as the back is straight up at a 90 degree angle and the cushion are a bit on the thin side so when you sit, the back digs into your shoulder blades. Some couch pillows might help but have not tried that yet. The directions were useless. I put this together in 90 plus degree heat and finally gave up on the directions and just figured out what screws fit where. Took all day. Not as good of quality that you would find at the box stores but also not as expensive. The box store ones cost much more.

The set is sturdier than I thought it would be, especially when I lifted each piece out of the box and found them all to be very light weight. Plus, there's only a small handful of bolts that are used to assemble each piece. Those two factors in mind, I was expecting it to be a little shaky when I sat on it, but I was wrong. The frame feels very sturdy.Along that same line, when I first considered the light weight along with the faux wicker, I thought the set would look cheap once assembled but, again, I was wrong. The set looks really nice once it's all set up.The assembly wasn't too difficult, as long as you use your own tools. I could imagine losing my mind if I used the little wrench and hex key to put this entire set together. There was an bolt or two that required a little bit of flexibility to reach, but nothing too difficult. The reason I give assembly only 4 stars is because the directions don't do a good job of identifying the bolts that you need to use on a given section. It's pretty quick to figure out, but there was a part of me that was wondering if I'd have to disassemble/reassemble down the line. I did not, so it was all good.One more thing I was mostly wrong about - the backs to the chairs are short and I thought they were going to prove uncomfortable. I'm 6' tall and, at my height, the short backs didn't really turn out to be an issue at all. Everyone else in the family is shorter, so no problems there. I'd have to imagine if you were a tall person the short backs would have to be less supportive than they are for me and my family, but I can't say that with any certainty (because I'd probably be wrong again).My primary issue with this set is the pillows. First, the bottom ones slide around under you pretty easily and there's no way to anchor them to the base. But the real downside is the comfort. They're fine if you're just spending a little time on them doing whatever. But if you want to settle in and spend some time, say reading a book or maybe taking a nap, the pillows 'wear out,' for lack of a better term, and your comfort is marginal, at best. The manufacturer or reseller or whomever is responsible for getting this product on the market should offer an upsell option for a better set of pillows. I'd have definitely paid more to get pillows that were more beefy. Plus, the manufacturer should add something that anchors these to the base. That would have made this set a nearly perfect.Overall, I think it's good value for the money, maybe a little better than I expected, but the pillows need improvement.

I like the sectional sofa.Pros :- sturdy construction- easy installation :putting it together took a short amount of time(using power tools).- just right size and weight for my deck :It's slightly smaller than anticipated but just right for my deck.- cushions are comfortable and serve their purpose. Have them covered when not in use so haven't tested how well they repel water- love that I can arrange the pieces in different configurationsCons:- bottom cushions keep sliding out when I sit : A small and cost effective change to the design like adding a lock and hook fasteners (I did this) could have been a great improvement. Or a more sturdy design change like slightly raised front could help keep the cushions in place.- back and side cushions keep falling out: same as above, a small change to keep cushions in place will go a long wayOverall I am quite happy with my purchase and would recommend it.

I did a ton of research and shopped for months before choosing new patio furniture and this set has not disappointed. I was concerned about people saying it was too short. I'm 5'10" tall and there is plenty of back support for me. I love the adjustable corner seat that allows me to lay and read outside. We have a large family and wanted something we could all sit together on. Assembly was not hard but did take some time. The shipment came in 3 large boxes and it came on different days. The material on the cushions seems durable enough to withstand my dogs that have spent the last two weeks on it. It also wipes clean easily. I wish the bottom cushions had some sort of Velcro to attach it so the cushions didn't shift, so I will be adding that later. But overall I have loved this set! 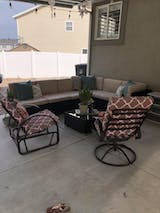 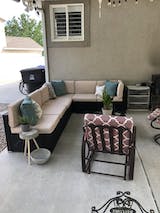 S
SandySandy
Great set.... Once you figure out which screws go where!

OK now let me share with you the info you need to cut this project in half. The directions are not good so you'll need these tips!Tips are for the table & 4 pieces NOT the corner pieces... I would do the corner pieces last.Tips: There are 3 sizes of screws in the bubble pack. Look carefully. a5 are the smallest screws, a3 -medium size, a1 ~ the largest screws. It's the little things...once you have that figured out the job goes super fast. Trust me because the pics/info are confusing. Building this with two people is ideal. The finished product is fantastic! We are really happy with it. We built the table 1st... once we had the screws identify we had everything built in a couple hours. I am worried about sturdiness but I guess time will tell. We're handy will figure something out. 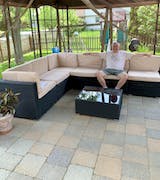 For the price, you cannot beat this! It looks great on our back patio deck! I appreciate it coming with a table as well! It is comfortable and the corner seat can be adjusted to sit up in different positions! The only "negative" things I could really say about it is, I wish the bottom of the cushions had some type of traction of it. They're easy to slide off! Also, I wish every cushion for the backs had a strap to attach it to the back of the seat. Other than that I love it!